From the airport we took the metro and then the tram to Sultanamet station (4 lira, approximately €1.3 per journey), where we were treated to ten-minute walk through the square between the Blue Mosque and the Hagia Sophia to get to our hotel (Eski Konak, €40 per night for an economy room). The hotel lies in the middle of Akbiyik Cardessi street, notable for its many restaurants and large flags hanging over the road. The hotel lady was a very friendly 55-year old Dutch lady who told us she came to Turkey for love at 40. She told us that our room had been double-booked for the first night, which was a bit annoying. A boy came to help us take our luggage down the stairs and round the corner to their sister hotel, the Sky Blue Hotel. Our first impression was that it was rather tacky, due to the blue neon lights on the stairs and the dark wallpaper. However, they put us in Suite 2, which had a circular bed and a jacuzzi-bath, so we liked that! 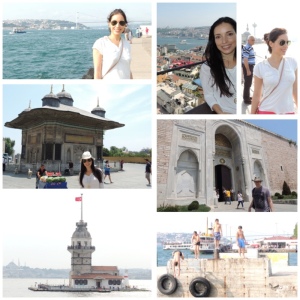 After a simple Turkish breakfast in the Sky Blue Hotel basement, the Eski hotel lady took our cases to our intended room in the Eski Konak. Although space was at a premium we managed to make ourselves comfortable. We then caught the Marmaray metro to Uskudar and strolled up and down the Asian bank of the Bosphorus, taking in the views of the Bosphorus bridge, the fisherman, the cool breeze and Maiden’s Island. We then caught the ferry (€1.3) back to the European side at Eminonu, getting lots of snaps of Topkapi Palace, Galata Towerand the mosques. We met a Turkish businessman there who offered to take some pictures for us, and recommended visiting the elegant Sulimaniye Mosque. We disembarked at Eminonu and caught the tram back to the hotel.

Our second day in Istanbul saw us wake to one of the best buffet breakfasts of the trip so far. There was a fantastic spread including fresh watermelon, honeydew melon, spinach omelettes, choice of cereal, yoghurt, tomatoes, olives, cucumber, boiled eggs, bread, cheese, ham, salami, fruit juice, tea, coffee and cakes. To cap it off, the breakfast was served on the roof of the hotel, with the option of sitting on the sun terrace, with breathtaking views down the hill to the Marmara coast, with a refreshing sea breeze.

After gorging ourselves we attempted to visit the Hagia Sophia but it was closed on Mondays, so we went to the magnificent Blue Mosque instead. Called the Sultanamet Mosque by the locals, it gets its blue nickname from the thousands of tiles that glow in the sunlight. Now serving as the city’s principal mosque, it was free to enter and we were required to put out shoes in a clear plastic bag provided and I wrapped a shawl around my hair and shoulders out of respect (again provided for visitors). The first Turkish mosque to have six minarets, it comprises of a peaceful square courtyard and huge open interior with chandeliers hanging down from the ceiling and a roped off area for local use. 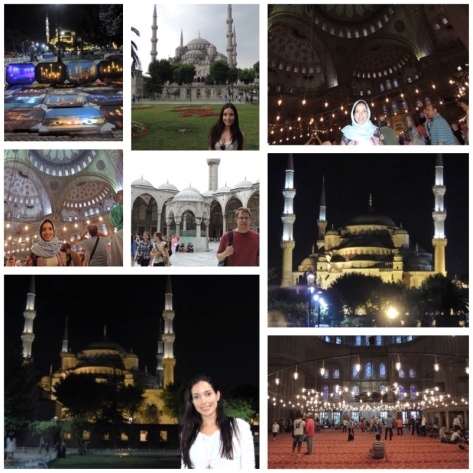 From there we made our way to the Basilica Cistern (€6 entry). What a sight to behold! Built as an underground reservoir the roof was supported by dozens of pillars, each different, built from whatever was available at the time. The place had a calm, slightly eerie atmosphere thanks to the clever lighting, music and large fish swimming around. In the far corner you can even see two heads of Medusa; one on its side, the other upside down. Probably placed there deliberately, they serve to protect the place from evil spirits. 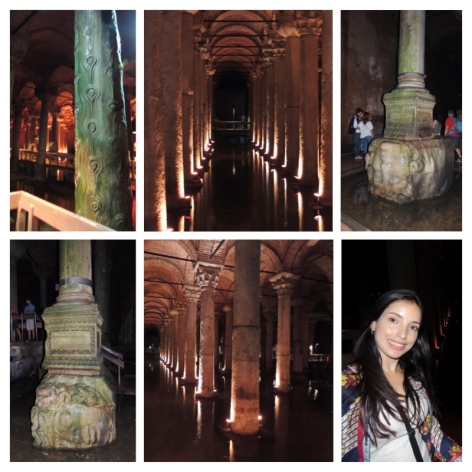 Back above ground we found a cute little restaurant on a side street where we ordered a Testi kebab (€20 for two people). It came in a ceramic jar, that was heated on a trolley in front of us before the waiter breaks off the end of the jar and pours out the food (lamb in a tomato and red wine sauce, with vegetables). 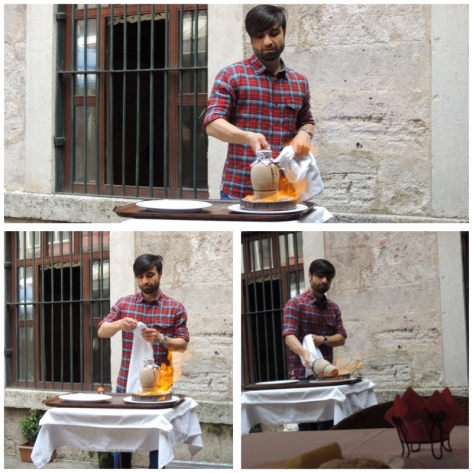 Next on our itinerary was the Grand Bazaar, the largest and oldest covered market in the world. Just by the entrance I found the simple yet classic watch I was looking for. Similar to the souks in Morocco, the place was a maze of streets, full of hundreds of tiny shops, selling everything from slippers to teapots. 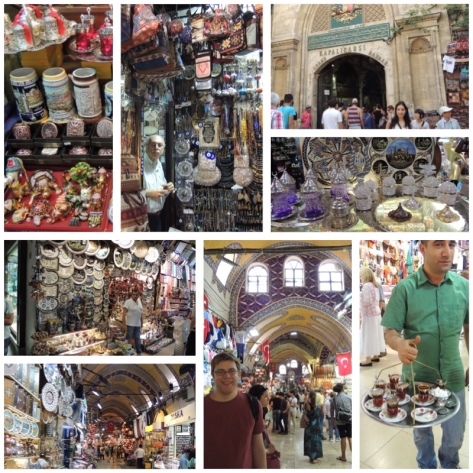 The following day we visited the glorious Hagia Sophia built by the order of Byzantine Emperor Justinian in 532. Once, a Christian church, later a mosque it is now a museum and it boasts one of the largest ancient domes in the world. It’s a must-see for Christians, Muslims and non-believers alike. The mosaic ceilings, calligraphy and roman history make it one of the most fascinating buildings in the world. The external reinforcements meant it survived wars, sieges and earthquakes. 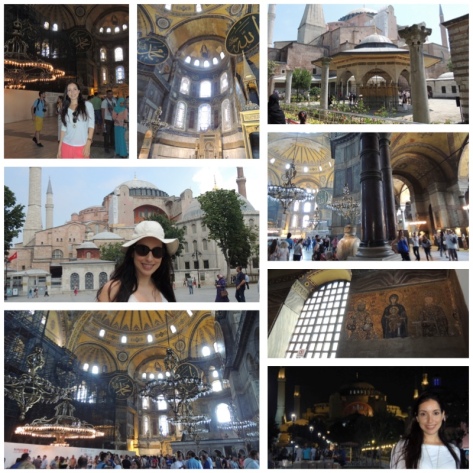 Upon exiting we strolled through a street notable for its preserved clap-board houses around the back of the Hagia Sophia in search of Topkapi Palace (closed, as it was a Tuesday). There was a queue for the small booth so we vowed to come back another time. We then took the tram across the Golden Horn to visit the Galata tower (€10). We alighted at Katakoy by the Galata bridge and scaled the steep streets, through a 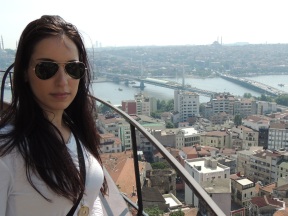 n arty area reminiscent of Camden Town, up to the sinister, stone tower (one of the oldest in the world). A lift takes you up seven floors but you have to take the staircase up the remaining two. The narrow balcony affords you a 360° view of the city, the numerous bridges and mosques.

On the way home we stopped off at a shop just by Sultanmet square as I was enchanted by a red, Turkish belly-dancing costume, so we had to buy it! That evening we dropped into the reasonably-priced Broken Column restaurant just down the road from our hotel. We took up their offer to eat on the roof terrace (four flights up) which had unparalleled views down over the street on one side and the sea on the other. Mark had a very tasty Isker kebab (slithers of lamb doner, smothered in a spicy, tomato sauce, served with yummy Turkish rice (pilaf) with fried orzo in it and I had a green salad and dolmata. That evening we befriended a Dutch man, married to a Turkish woman, and his young daughter up on the roof terrace. He was telling us that they often come to Istanbul and you can see many Islamic treasurer’s at Topkapi, such as famous calligraphy and Mohammed’s clothing.

Our final day was supposed to be a rest day, but after another tasty breakfast we went to the express launderette where we left our dirty clothes for about €14 for the same day wash and fold only service. After we went to the small post office booth, only to discover that for parcels we would have to go main post office back in the Sirkeci district. This time we walked it, lunching in McDonalds on the way. After visiting three sales desks and the money-exchange desk we managed to successfully post a package comprised of the belly-dancing dress and an old camera. We strolled back to the hotel at a leisurely pace, rested for while before collecting our fresh laundry and visiting the square one last time, for sweetcorn and kebabs.

The following morning we had breakfast before our airport transfer shuttle arrived to whisk us back to Atatturk airport (€5 each, from a travel agency round the corner).

What an marvellous city!! I was pleasantly surprised with how beautiful Turkey is. 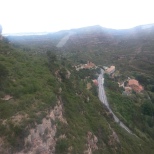 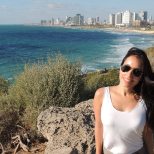 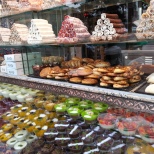 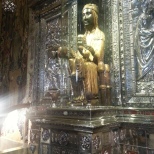 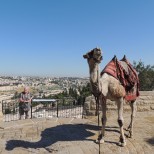 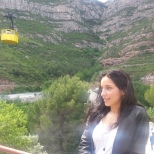 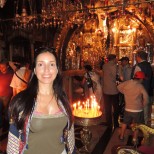 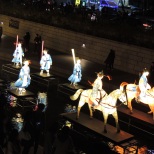 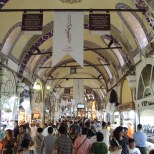 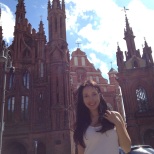 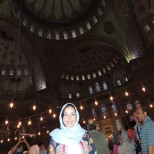 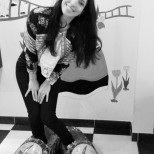 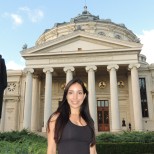 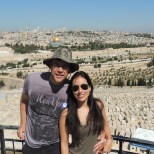 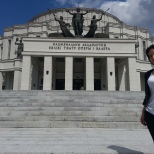 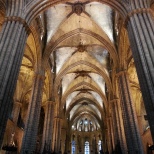 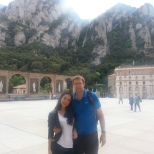 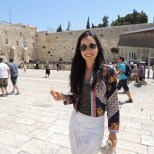 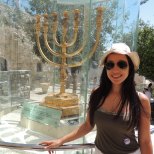 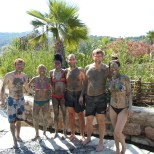 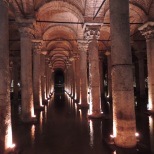 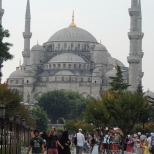 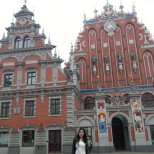